What was the first international telecast? Did Arthur Clarke’s prediction come true? And what is the role of Ayn Rand, a soccer ball and the Dior fashion house?

“Attention, you are in Paris! I invite you to spend a few pleasant minutes with me,” says the announcer. And a Parisian street appears on the TV screens of millions of Americans, and the famous actor and chansonnier Yves Montand strolls along it, humming a French song. Such, rather modest, was the debut of international television.

The “Television star” in orbit

Broadcasting across the Atlantic was made possible by the Telstar 1 telecommunications satellite, launched into space on July 10, 1962, aboard a Delta rocket. The spacecraft was the result of an international collaboration between the American Telephone and Telegraph Company (AT&T), Bell Labs, NASA, the General Post Office of Great Britain and the Minister of Posts and Telegraphs of France.

Telstar had a spherical shape and a diameter of 90 cm. It consumed 14 W of energy (the power of an energy-saving light bulb), which was produced by 3,600 solar panels on its hull. The width of the communication channel made it possible to make 600 calls and one black-and-white television broadcast simultaneously. Telstar 1 was placed in low Earth orbit, making one revolution in two and a half hours, of which for only 23 minutes it could provide communication between Europe and the United States.

The era of pre-satellite communication

Before Telstar was launched, TV and radio towers could transmit TV shows and other information point-to-point over the air. Also, there was already an extensive network of land communication lines. But as soon as these signals reached the ocean, they were lost above its boundless expanses.

In 1956, AT&T inaugurated the first transatlantic telephone cable, connecting the United States and Canada to the United Kingdom for telephony and data transmission, but the technology was unable to meet the growing demand for international communications. The cable had only 36 independent speech channels, and 51 amplifiers had to be installed for its operation.

The prototype of Telstar was the experimental satellite Echo 1, which was launched by NASA on August 12, 1960. An inflatable ball with a diameter of 30 m served as a passive reflector. An orbiting satellite relayed a radio signal between two stations on Earth. Interestingly, Echo 1 played an important role in another scientific discovery.

In 1963, young researchers Arno Penzias and Robert Wilson, who worked at Bell Labs, received permission to use the radio telescope that provided communication with the Echo 1 satellite. Using the telescope, Penzias and Wilson began to study the radio emission of stars in our Galaxy. But to begin with, they needed to get rid of the background noise that they constantly registered during the observations. Scientists made a lot of efforts, but the noise never disappeared. Astronomers realized that they were recording real radiation from space. In 1978, Arnaud Penzias and Robert Wilson shared the Nobel Prize in Physics “for the discovery of the cosmic microwave background radiation.”

The first private one

Telstar differed from all previous space-age projects in one important way: its funding came primarily from the privately held AT&T Corporation. Promotional materials claimed that Telstar paid homage to the American system of free enterprise, which during the Cold War was perceived as a counterpoint to the planned economy of the Soviet Union. At the same time, satellite communication technology as a symbol of progress was already highlighted by US President John F. Kennedy in his famous “Moon” speech in May 1961, in which he called for accelerating the use of space satellites for worldwide communication as a US response to the Soviet challenge. As expected, the USSR announced its own ambitions in this area. As the Washington Post noted, “the Red plan to send two communication satellites to broadcast propaganda programs to the entire world.”

AT&T had ambitious plans to create a worldwide commercial satellite system capable of broadcasting major events such as the Olympics, coronations, and celebrations from anywhere in the world to the United States. Also they were planning to provide unlimited channels for business and personal phone calls across the ocean. Despite the considerable resources available, AT&T was unable to carry out the large-scale project on its own. The British and French governments became partners, and NASA provided launch services.

The famous futurist and science fiction writer Arthur C. Clarke published a short essay as early as 1945 describing the use of space satellites to provide intercontinental communication. But after the actual launch of Telstar he made an even more interesting prediction, when he tried to outline the significance of these events for Life magazine.

Clark was convinced that humanity would soon receive a high-quality global telephone service and two people in different parts of the world would be able to talk at any time of the day or night. He also believed that there would be a rapid development of global television, and the main events in any part of the globe could be watched live. The latest technology, according to Clark, would also affect people’s social life. In particular, as soon as it becomes possible to contact anyone in a second, the number of trips and commutes would be significantly reduced. Businessmen would be able to live wherever they want and run a large law firm or advertising agency from Bali or Tahiti. As the need for business meetings disappears, fewer and fewer people would live in cities. The city as a social structure was doomed, according to the futurologist.

The launch of the first telecommunications satellite received wide public interest and publicity in the mass media. Journalists predicted round-the-clock broadcasts from the most exotic places. However, the truth was somewhat different. Communication was no more than ten times a day and lasted a little more than 20 minutes. An important question arose: what to show in this precious air time?

The first connection was established between two American cities — Andover (Maine) and Washington (D.C.). A US flag flying in front of the Andover satellite ground control station appeared on TV screens. Then a conversation between AT&T representatives and Vice President Lyndon Johnson was heard.

The next day, the French television took up the relay baton. Their repertoire was not so formal. Yves Montand sang for the audience, and in the background there were the streets and cultural sights of Paris. On the same day, air time was given to the third participant of the project — Britain. On the screens, the audience saw the engineers and technicians of the Goonhilly Satellite Earth Station.

Next television broadcast were prepared more thoroughly. On July 23, several hundred million viewers on both sides of the Atlantic, in sixteen countries, including socialist Yugoslavia, watched US President John F. Kennedy’s press conference on the value of the dollar. At that moment, European gold markets fluctuated due to information that the US was going to devalue the dollar. When a reporter asked about the rumors, Kennedy strongly denied them, which almost immediately caused the dollar to strengthen in Europe. This broadcast also featured a major league baseball game from Chicago and images of NASA facilities.

The first broadcasts caused a lively discussion in society about what the content should be. Should satellite TV spread important news or emphasize the advantages of the political system of the countries that stood near the origins of Telstar? Maybe, it should be just for fun? And most importantly, who is to decide all that?

Writer and philosopher Ayn Rand saw Telstar as a path to a totalitarian suppression of free speech, asking: “Who among us will gain access to this global network? And if not, how will we be heard?”.

However, optimistic assessments were more common. Addressing the believers in Saint Peter’s Square the Pope told that Telstar helped strengthen brotherhood between nations and marked a new stage in peaceful progress. In turn, when Vice President Johnson visited the Pope in the fall of 1962, he presented His Holiness with a model satellite.

In the following months, broadcasters experimented with content. Telstar’s scarce time was used to broadcast in France a twenty-minute program on the death of Marilyn Monroe, which included photographs of Miss Monroe’s bedroom, where her naked body was found.

Parisian fashion designers shared sketches of upcoming fall collections, breaking the long-standing tradition of not showing anything from a new collection before its presentation on the catwalk. The Dior fashion house showed the silhouettes of the new collection to satellite television viewers, noting that peeking behind the scenes is allowed only for the sake of science.

In addition to television broadcasts, the satellite also tested other methods of communication. For the first time, a meeting of officials from twenty-three US cities and twenty-three European cities was held, the main clocks in the US and Britain were synchronized, etc.

The active operation of the satellite lasted only a few months, because it became a victim of nuclear weapons. On July 9, the day before Telstar was launched, the United States conducted the Starfish Prime test, which involved the launch and detonation of a 1.4-megaton nuclear bomb at an altitude of 400 km above Earth. In Hawaii, one and a half thousand kilometers from the launch site in the Pacific Ocean, the sky got orange-red. The explosion increased the intensity of radiation in the lower radiation belt of the Earth, which in turn negatively affected Telstar’s electronics. At the beginning of 1963, the satellite failed.

Today, there are tens of thousands of satellites in orbit around the Earth, providing us with mobile communication, navigation, television and the Internet. During those 60 years, satellite communication paced a long way of technological advance, but it was Telstar that pioneered this new era. 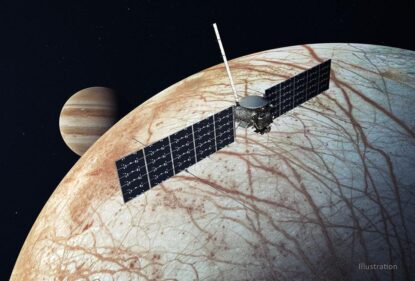