On this day, exactly 45 years ago, a launch took place from the spaceport at Cape Canaveral, which commenced the greatest journey in human history. We mean the Voyager mission — a pair of probes that were first man-made messengers to visit all the giant planets of the Solar System and then they flew out into interstellar space. On the occasion of today’s anniversary, we would like to tell the story of this amazing mission. For convenience, we have divided the material into two parts.

The concept of “The Great Journey”

In the 1960s, employees of NASA’s Jet Propulsion Laboratory (JPL) made an interesting discovery. In the second half of the 1970s, Jupiter, Saturn, Uranus and Neptune were supposed to line up in space in a huge arc that only happens once in 176 years. This provided a unique opportunity to explore them during one flyby mission. At the same time, the use of planetary gravity for acceleration made it possible to significantly reduce the travel time and reach Neptune in just 12 years.

Soon, a program called the Grand Tour was born in the bowels of JPL. It was supposed to send four probes into space to study the giant planets and Pluto.

Unfortunately, due to the high cost, the Grand Tour did not receive the necessary funding. Therefore, JPL employees significantly reduced the scope of the project. After the revision, only two probes left to study Jupiter and Saturn (but with the possibility of further extension of the mission). This time, it was success. The project was approved and received the necessary funding. Initially, it was called Mariner Jupiter-Saturn, but later received the name Voyager, under which it entered history.

Both Voyagers have an identical design. Their basis is a hermetic housing in the form of a decahedral prism 0.5 meters high and 1.8 meters in diameter. It is equipped with an antenna, engines and outriggers with scientific instruments. The initial weight of the device (including fuel) was 825 kg.

To obtain energy, each Voyager is equipped with three radioisotope thermoelectric generators (RITEG) that contain plutonium-238. When it decays, heat is released, which is then converted into electricity.

The Voyager scientific toolkit consists of a set of cameras, spectrometers, a magnetometer, and several detectors and receivers to study environmental parameters. The main block of scientific instruments is placed on a special rotating platform.

The devices are controlled using three separate computer systems (each of them is duplicated). Their total RAM is about 68 kilobytes. Voyager also has a 67-megabyte storage device that can store up to 100 images from its television cameras.

It should be noted that all the key components of the devices are fully backed up. It was this technical solution, as well as the possibility of remote reprogramming of Voyager’s computers, that led to the exceptional longevity of the mission. During the flight, the probes repeatedly encountered technical problems and damage, but thanks to the availability of spare components, none of them became critical.

The beginning of the Great Journey

Voyager 2 was launched on August 20, 1977, Voyager 1 — on September 5, 1977. And this is not a mistake. Voyager 2 did go into space before Voyager 1. However, since Voyager 1 was moving on a faster trajectory, it soon overtook its “brother”.

Already on September 18, 1977, Voyager 1 photographed the Earth and the Moon from a distance of 7.25 million kilometers. This is the first ever picture where the whole of our planet and its satellite are in one frame.

In 1979, Voyager 1 and Voyager 2 reached their first objective — Jupiter. The cameras discovered its rings, three previously unknown satellites, and also took detailed pictures of both the planet itself and its moons. It turned out that Ganymede is the largest satellite of a planet in the Solar System (Titan was previously thought to be slightly larger), and Europa has a smooth icy surface covered with cracks. Later, it was hypothesized that an ocean hides beneath.

But the main sensation was Io, where active volcanoes were found. This is the first time in history that ongoing geological activity has been detected on other body in the Solar System beyond the Earth. According to many of the project’s staff, Io’s volcanoes are the most important of all Voyager discoveries.

In 1980-1981, both probes visited Saturn. The sixth planet also had a lot of surprises in stock. It turned out that its rings are much more complex than previously thought, and actually consist of hundreds of small rings. The so-called shepherd moons were also discovered. Shepherd moons are small satellites whose gravity affect the rings and hold their particles together. The probes carried out a detailed survey of all the main satellites of Saturn, and also discovered a number of its previously unknown moons. It turned out that Mimas resembles the Death Star from Star Wars, while Iapetus’ hemispheres are radically different in color.

One of the main tasks while visiting Saturn was to study Titan, the only satellite of a planet in the Solar System that has a full-fledged atmosphere. Unfortunately, it turned out to be completely opaque in the visible spectrum, so Voyager was unable to image its surface. But an analysis of the atmosphere has shown that the temperature on Titan is close to the “triple point” of methane, at which it can simultaneously exist in liquid, solid and gaseous states. Later, this assumption was confirmed by the Cassini mission.

After Saturn, the paths of the devices diverged forever. Thanks to the success of the mission, NASA managed to get the program extended and get permission to send Voyager 2 to Uranus and Neptune. As for Voyager 1, after its visit to Titan, Saturn’s gravity sent it aside of the ecliptic plane of the Solar System.

Voyager 2 reached Uranus in January 1986. It turned out that the structure of the planet is significantly different from Jupiter and Saturn, whose mass is 90% hydrogen and helium. On Uranus, only the atmosphere consists of hydrogen and helium. Beneath it there is a kind of ocean, which consists of a mixture of water, ammonia, methane and hydrogen sulfide. In the center, there is a stone core. Later, the term ice giants began to be used to denote such celestial bodies.

It also turned out that Uranus is the coldest planet in the Solar System, its magnetic field is asymmetric, and magnetic poles are very much shifted in relation to the geographic ones. Another important achievement of the mission was the discovery of 11 new moons of Uranus and several rings.

After Uranus, Voyager 2 headed for Neptune. The flyby took place in August 1989. According to its internal structure and characteristics of the magnetic field, the planet turned out to be similar to Uranus. A large storm was found in its atmosphere, which was called the Great Dark Spot. Further analysis of the Voyager 2 images also revealed several unknown satellites.

The main “star” of the flyby was Neptune’s largest satellite, Triton. Cryovolcanoes that spew nitrogen were found on its surface. And something like frozen lakes were seen near the equator, with shores in the form of stepped terraces, up to a kilometer high. This indicates that Triton’s surface has melted several times in the past — perhaps due to tidal interactions with Neptune.

Analysis of Voyager 2 data also solved the mystery of Planet X, a hypothetical celestial body that affects the orbit of Uranus. Searching for this mysterious planet astronomers once discovered Neptune. But then it turned out that its mass was not enough to explain all the deviations, so they continued their quest and discovered Pluto. But measurements by Voyager 2 showed that Neptune’s mass was originally determined with an error. When it was taken into account, all the inconsistencies in the orbit of Uranus disappeared — so the Planet X became redundant.

By the time of the rendezvous with Neptune, the existence of the Kuiper belt remained only a theory — its first object was discovered only in 1992. Therefore, the eighth planet was the last objective for the device. After its flyby, Voyager 2 followed a trajectory directed “down” in relation to the ecliptic plane of the Solar System.

But although the devices had no more planets left to study, they soon reminded of themselves again. In February 1990, Voyager 1 took a family portrait of the planets of the Solar System. One of the pictures captured the Earth as well. This image was named the Pale Blue Dot, and is now considered one of the most important space images in history.

After the Grand Voyage was completed, the US Congress proposed several times to stop further funding for Voyager, citing the high cost of long-distance communication sessions. But NASA managed to protect the project. The organization knew that in the future, the devices would reach the border that separates the solar system from interstellar space. The whole question was whether they would have time to do it before the end of their work… 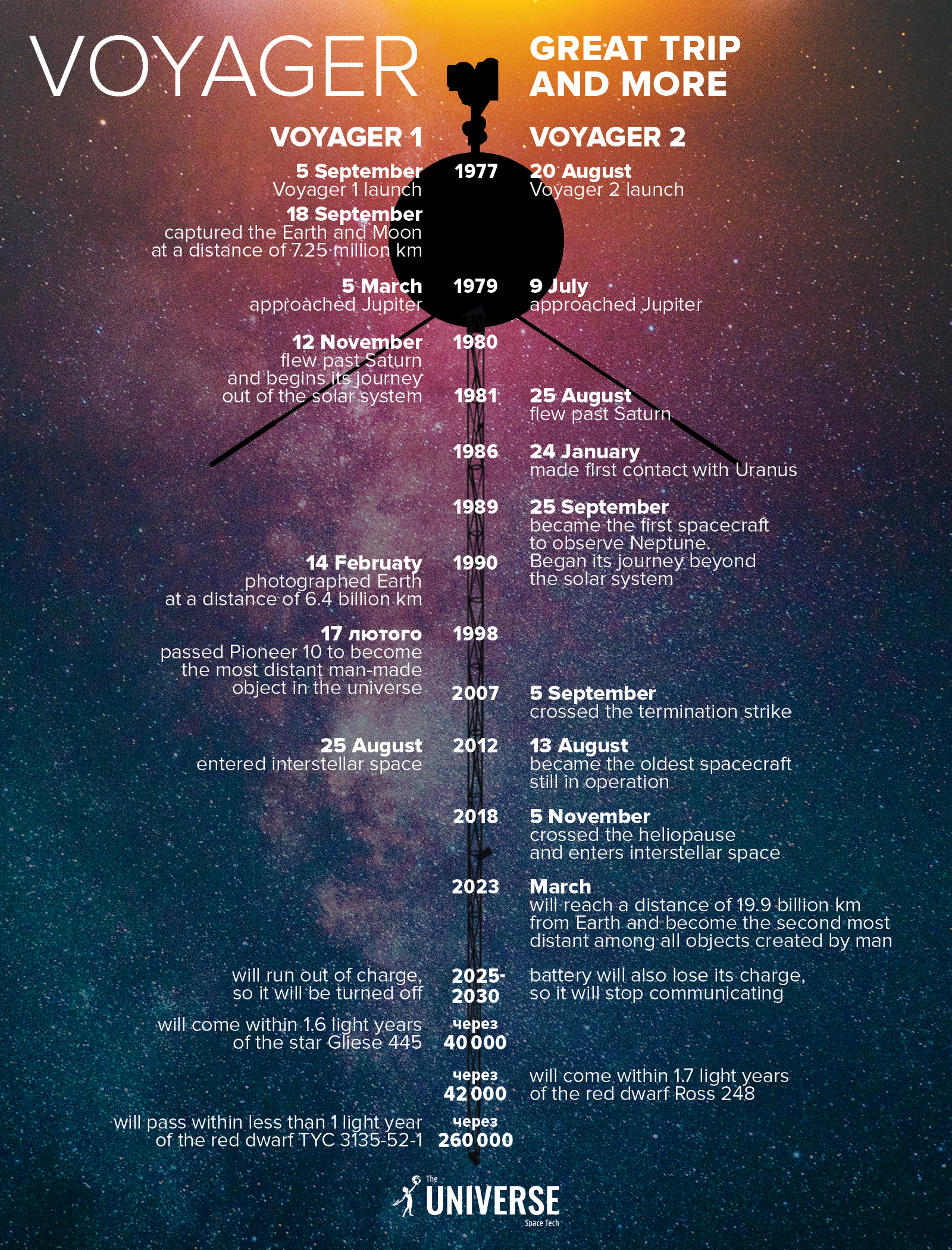 We are going to talk about how the Voyager probes got into interstellar space and what awaits the mission in the future in the second part of our review.